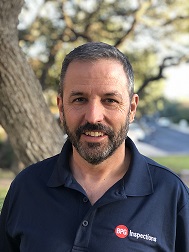 John is a native Texan. Originally, John was a Subsea Oil and Gas Systems Engineer working in Houston, offshore and overseas but he always enjoyed working on home improvement projects for himself and his friends.  After he married his wife who was in the Air Force, he found himself moving around the country every few years.  This is when he started his career in home inspection.  There’s always homes to inspect no matter where you live.

Being involved with military moves, John was never able to stick around to perform inspections on the houses they were buying so he understands how important it is to be able to depend on a thorough inspection by a good inspector that writes great reports that are easy to comprehend.

John first trained as a home inspection while living in Tucson, AZ working as an apprentice under a master inspector.  Upon moving back to Texas, he attended Champions School of Real Estate for his Texas Professional Home Inspector certification.  John is also a graduate of Texas A&M University with a degree in Engineering.

Being a military spouse, John has spent a lot of time working on houses that he and his family have owned in the places they have lived.  When he is not swinging a hammer or covered in sawdust, he is usually spending time with his family and friends. John owns golf, fishing and hunting gear but his major hobby would probably be his friends. If you see him out golfing, fishing or hunting it’s because a friend said, “Let’s go!”  His kid’s sports keep him busy most of the time when he is not working. John loves snowboarding. (It’s a tough hobby for a Texan.) His wife introduced him to it and she has regretted it ever since.

Schedule John for an inspection by calling our office at 800-285-3001 or schedule online at ezo.bpginspections.com

John was very thorough, I am a first time home buyer and he educated me of things on a house to look for on houses and I felt confident in my decisions after reading the report laid out was simple and mainly I walked away learning.